In 2010 HFG's Zwijndrecht fabrication facility has been awarded the contract for the Engineering, Procurement and Construction of the DolWin alpha HVDC platform by ABB Sweden. The topsides are constructed at HFG’s facilities in Zwijndrecht and the jacket is fabricated at our Vlissingen yard. ABB contracted Heerema Marine Contractors for the transport and installation of the DolWin alpha platform.

The DolWin alpha jacket is a 6-legs jacket and has been built for 40% indoors allowing a shorter fabrication period. The design started in March 2011 and in November 2011 fabrication started. Subsequently the jacket sailed to its final offshore destination in September 2012.

Dynamic project that required us to be flexible and creative 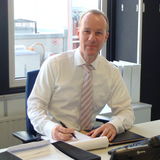